Killarney’s ice age began two million years ago and only ended about 10,000BC. As ice and snow was slowly pushed northward through the Killarney Valley, giving the mountains their jagged appearance, the Gap of Dunloe was formed.

The History of the Gap of Dunloe

The Gap of Dunloe dates back two million years, when slow-moving ice carved a narrow mountain pass between MacGillycuddy’s Reeks to the west and Purple Mountain to the east. The name Dunloe comes from the Gaelic Dún Loich, meaning the fort or stronghold of Loich, the first leader of an ancient tribe called the Fir Bolg (“men of bags”), who ruled Ireland before the Tuatha de Danaan and the Milesians.

The Gap became an important landmark in every tour of Killarney, a fashionable destination for tourists from the 1860s, when Queen Victoria visited. Its reputation grew in the early 20th century, with the advent of films shot in the area, including the travelogue On Horseback Through the Gap of Dunloe and Canadian director Sidney Olcott’s 1911 project Colleen Bawn. Entrepreneurs including photographer Louis Anthony launched flourishing enterprises based on the tourist trade to the Gap of Dunloe, which was a must-see element in any trip to Killarney by the early 1900s.

Tourism has been the mainstay of the Gap of Dunloe ever since, and it gave rise to another enterprise that thrived for a time: Furniture inlaid with arbutus wood was much in demand for souvenirs, and the production of arbutus furniture moved from Killarney town to the Gap of Dunloe in 1929. There, the Kiernan family operated a workshop until it was destroyed by fire in 1952.

Characters of the Gap

“In a defile in the hills of Kerry is Sir Echo himself…78-year-old Patrick Boyle, the bugler who wears no uniform. Into his seven-mile valley of echoes, the romantic Gap of Dunloe, come thousands of visitors from all lands to ride under towering cliffs and hear the magic bugle. For more than 60 years Patrick has ‘blown the echoes’ for millionaire and honeymooner.

His father before him made the valley echo for Queen Victoria. Unlike most buglers, he lives unsurrounded by precise barrack walls and men in uniform, he lives alone. But the bugle he blows these days was the gift of a soldier in 1948: a thoughtful gesture by Lieutenant-Colonel G Down, RA whose name and Paddy’s are inscribed on the much-dented instrument that wakes the valley.” 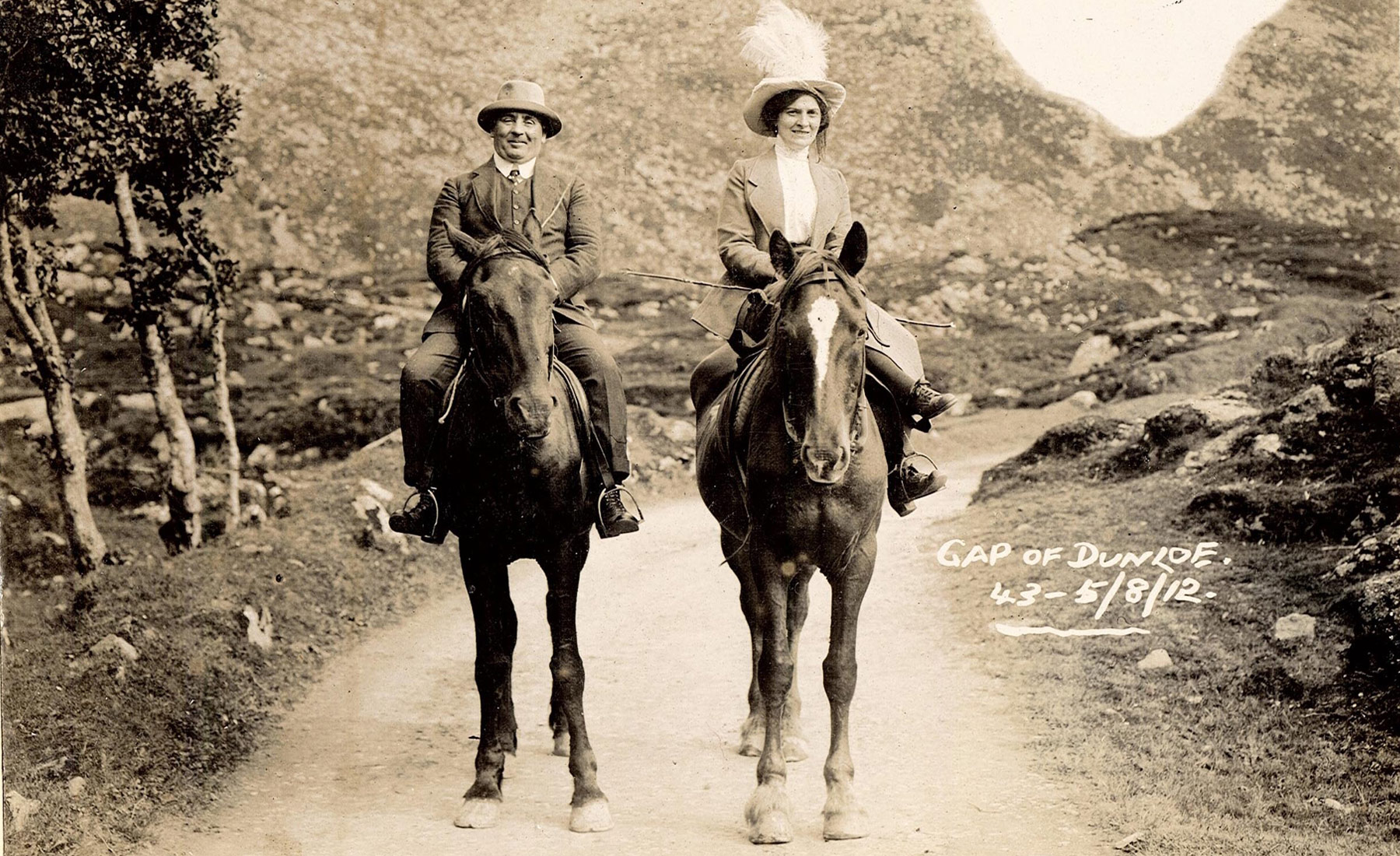 As with many an interesting history, the story of Kate Kearney’s Cottage begins with strong drink—and an even stronger woman. Kate Kearney was a woman of exceptional beauty and character who lived in Kerry in the years before the Great Famine of 1845 to 1849.

The legend began in a cottage at the eastern edge of the McGillycuddy Reeks mountains and has captured the popular imagination ever since.

It was at this síbín that Kate distilled a particularly potent form of poitin, called Kate Kearney’s Mountain Dew. So strong that it could not be drunk without at least seven times its own quantity to temper it, this Mountain Dew was illegal, but Kate ignored the law and continued to create her special liquor and sell it to tired travellers in need of reviving.

Following Kate’s demise, the next owners to carry on the tradition of hospitality at Kate Kearney’s Cottage were Julia Burke and her husband Donal Mór Moriarty. That tradition continues today with the current proprietor, Sean Coffey, who is a great-great-great-grandson of Julia and Donal Mór. Kate’s Mountain Dew is no more, however.